The American Cancer Society (ACS) made a dramatic announcement this past week.  The ACS just released its latest screening guidelines for colon cancer, and recommends dropping the screening age for colon cancer by a whopping 5 years.  While it was previously at 50 years of age, they now encourage screening at age 45.  This is the first time we’ve seen such a dramatic lowering of the recommended screening age for this disease.  Colorectal cancer is the fourth-most-common cancer diagnosis among adults in the United States. This year, more than 140,000 Americans will be diagnosed with colorectal cancer and about one in three of those are expected to die from it.  The recommendation to initiate screening at a much younger age comes on the heels of a startling trend: higher prevalence of colorectal cancer in young people.  Screening for colorectal cancer, which allows identification and removal of polyps that can become cancerous, became widely available over the past two decades.  During this time, the overall incidence of colorectal cancer declined precipitously.  This is likely due to the universal adoption of colonoscopy as the screening modality of choice. Colonoscopy is considered the gold standard because it is the only test that allows for both detection and removal of colonic polyps.

The startling new data however, shows that the risk of colorectal cancer is two to four times higher for younger adults born around the early 1990’s than in adults born after 1950.  This data points to a disquieting conclusion; as younger adults age, they have an elevated risk for colorectal cancer.  Even more disturbing, a study by investigators at the prestigious MD Anderson Cancer Center in Texas predicted that by 2030, rates for colon and rectal cancers will increase by 90 percent and 124 percent, respectively, for patients 20 to 34 years old. The $64,000 question is: why the “sudden” rise in colorectal cancer rates among Gen X and millennials? Researchers point to possible associations with rising obesity rates, sedentary lifestyle, and regular consumption of processed meat and foods with refined flours and sugars, and alcohol (a pro-inflammatory diet, discussed in our previous article) as putative risk factors for this alarming trend. In other words, young people are far from helpless. For those in this age group, there is little doubt that regular exercise, avoidance of inflammatory foods and beverages, and a strong emphasis on fruits and vegetables will greatly improve your prospects for good health, and may help you banish the specter of this dangerous but preventable disease.

What does all this mean? If you are an American born after 1990, you should be aware that your risk for colorectal cancer is disproportionately higher than the rest of the population; this realization could save your life. If you are age 45 or older, you should see your primary care physician and discuss the various colon cancer screening options available, including colonoscopy, every 10 years; high-sensitivity stool tests which detect blood in stool, every year; a DNA stool test every three years; or a flexible sigmoidoscopy every five years.  More important, regardless of your age, you should seek medical attention if you experience alarming gastrointestinal symptoms.  Such worrisome symptoms include, among others, persistent changes in bowel habits, rectal bleeding, abdominal pain, and weight loss.

Dr. A-Rahim works with our Medical Advisory Boards, our Medical Directors, and our quality assurance programs to oversee improvement of clinical outcomes for our patients. He also organizes and leads Company efforts to measure and improve clinical outcomes for all centers and the Company as a whole. Dr. A-Rahim earned his medical and doctorate degrees from the Pennsylvania State University and completed a residency in Internal Medicine and fellowship in Gastroenterology at Beth Israel Deaconess Medical Center, Harvard Medical School. As a physician, he is known for his expertise in interventional endoscopy and minimally invasive treatments for gastrointestinal disease. He has authored several articles published in medical journals and has delivered presentations to fellow physicians around the country, including at his alma mater, Harvard Medical School.

Dr. A-Rahim is currently a Lecturer in Medicine at Harvard Medical School and practices gastroenterology at the VA Boston Healthcare System West Roxbury Campus in Massachusetts, and at Pacific Endoscopy Center, an ASC he co-founded in 2008 in Pearl City, Hawaii. 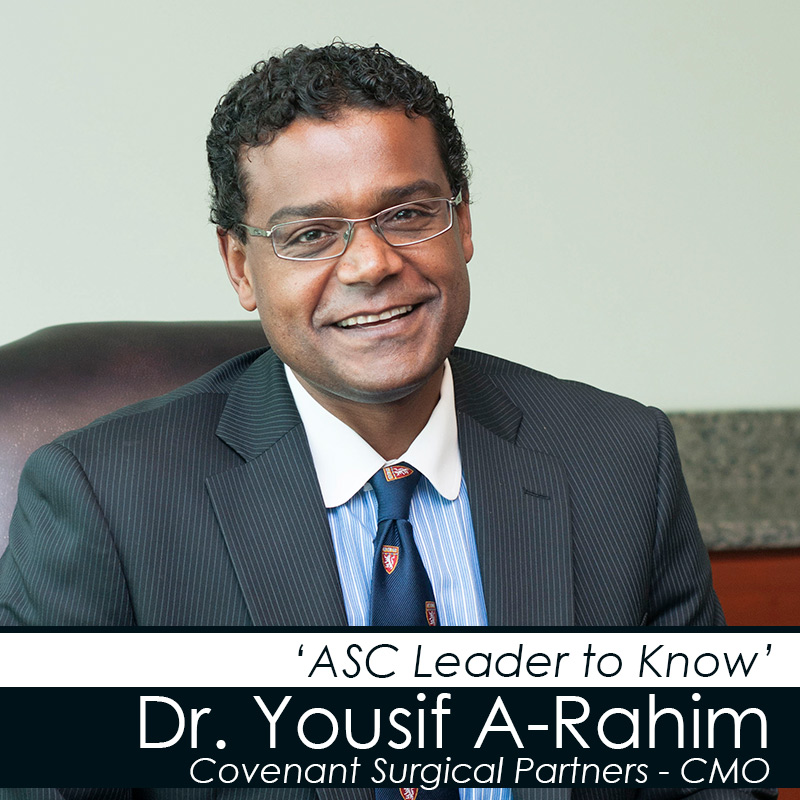